In my previous blog, I mentioned that events are often measured in three ways, that is, by the positive or negative impacts they can have socially, economically and environmentally.  These three impacts together form the Triple Bottom Line.

The environmental impacts of holding an event like Killarney Mountain Festival were extremely important to the committee from the outset. We saw the festival, from the very beginning, as an opportunity to promote environmental awareness and to foster a sense of stewardship among local people and our festival attendees. In a perfect world, the best event and festival organisers would have no hesitation in developing events using the most environmentally-friendly of supplies and resources. However, the challenge lies in trying to balance the budget and often in Ireland, it can be tricky to run an event using 100% sustainable materials on a standard budget, given how small the market is for such things on our little island. 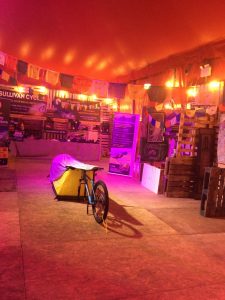 There were a number of talks at Basecamp across the festival weekend that promoted values that we wanted to promote, encouraging the protection of our natural resources and celebrating the natural beauty around us. Guest speakers such as Cal Major captivated the audience, sharing her insights into the damage plastic is doing to our waters, endorsing her Paddle Against Plastic campaign. Mark Hosford, Recycling Ambassador with VOICE Ireland, featured on Sunday  and shared his knowledge on what is and isn’t recyclable (Coffee cup lids – we’re looking at you!). The #BinSorted initiative surprised even the most environmentally- conscious among us, who are proactive in terms of minimising their general waste. Mark highlighted that the best of intentions be undone by contaminating the recycling bin with just one piece of rubbish that is not recyclable.

Cal and Mark undoubtedly made an impact on every single visitor who stopped by to have a listen. Their contribution to the festival greatly influenced the levels of awareness among the festival attendees at Basecamp over the weekend. This, in turn, influenced the extent to which we feel Killarney Mountain Festival reached its objective of having a strong positive environmental impact across the festival weekend.

Many of the talks encouraged the promotion of more ethical living. Gearfest, the brain-child of Piaras Kelly of KerryClimbing.ie, was a progressive and innovative mini-event which encompassed the ethos of Killarney Mountain Festival to a tee.  Taking place on Sunday morning, Gearfest gave climbers and mountain enthusiasts an opportunity to buy and sell second-hand unwanted or no longer used climbing equipment. This was an excellent way of reducing waste and reusing expensive equipment that was still in perfect condition.

In terms of infrastructure, we did our best to produce an environmentally-friendly event. Recycling bins were a key element. After some brainstorming, one trail-blazing committee member took the lead and organized the supply of ‘Killarney Mountain Festival’ branded Conscious Cups. Café du Parc, the pop-up coffee shop at Basecamp, and an established Café and Bar in Killarney’s town centre, also became the first coffee shop in Killarney to offer a discount to all customers who had their coffee in a reusable cup as opposed to a disposable one. 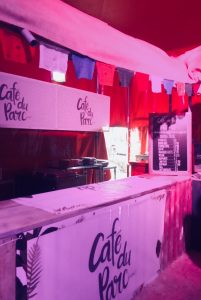 A number of elements of our festival décor, such as the Tibetan Prayer Flags and the colourful mesh banners used to decorate the town and the perimeter of Basecamp, were carefully chosen and sourced with the intention of being able to re-use them next year. Each committee member took responsibility for lengths of the prayer flags, which will be cared for with love  until the festival takes place again in 2019. In addition, our festival furniture, including our stage as well as our tables and chairs, were either kindly lent to us for the weekend, or were expertly crafted using recycled wood from pallets and leftover beams.

Items such as the photography stands used to hold our photography exhibitions were generously offered to us by the good people at The Killarney Outlet Centre, the absolutely awe-inspiring photography itself as well as the amazing memorabilia from the film Everest, were also on loan from very talented local photographers and a close  friend of the festival. Both of these exhibitions were hugely appealing to our festival visitors, and were elements of the programme that needed very little resource-wise to implement, thanks to the good nature of the people of Killarney that pitched in and helped us by lending what they could. Throughout the weekend, the Killarney Mountain Festival committee was reminded of the magic that can happen when everyone rows in together to achieve an end.

The event industry can be described at times as quite an expendable one, wherein resources are bought and utilised for one-off occasions. However, we tried from the outset to develop Killarney Mountain Festival with the intention of minimising the use of unnecessary resources and minimizing all waste.

Leaving no trace was also of great importance to us, and we have to say that the committee, volunteers and each supplier involved in the festival made a massive effort to ensure that we left the festival venues and spaces as they were given to us. It poured out of the heavens as the festival drew to a close on Sunday evening, and despite the wind and rain, not a single snipped cable-tie was left floating in a puddle. The post-event break was an all-hands-on-deck affair, with each and every team member doing their bit to ensure that the objectives of the festival were carried through to the very end.

We learned a lot in our first year about how to create a festival that makes a minimal impact on the environment but we also realised that what you can’t achieve with your budget, you can attempt to achieve by brainstorming, innovating and pooling together. We’re proud of what we’ve achieved in our first year and we hope to continue to build and improve upon what we’ve achieved in year one as the festival scales in the years to come.

We use cookies to ensure that we give you the best experience on our website. If you continue to use this site we will assume that you are happy with it.OkPrivacy policy